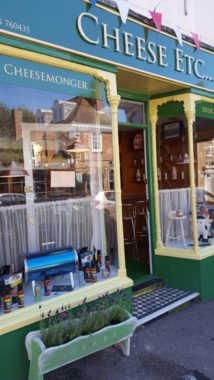 A new deli and cheesemongers opened in Uckfield on 12 July

Martin and Sharon recently opened a new Deli and Cheesemongers in the High street of Uckfield called Cheese ETC … Both have come with vast experience and great knowledge of cheese and the ability to source the best local Artisan products after recently parting with their first Deli called the’ Big Cheese’ near Minehead, West Somerset to move closer to Sharon’s sister and family in Worthing. They both had been in the catering business for a long time and wanted to get out of this sector of the hospitality industry and do something different so set up the ‘Big Cheese’ in Porlock in July 2008. Sharon had always fancied running a Deli and Martin had always been in love with cheese. So their unique selling point focused particularly on West Country cheeses.

Both Sharon and Martin liked Uckfield as it had quirky shops and was not over run by nationals with a great village mentality. They found out that Lewes had a cheese shop and Haywards Heath didn’t quite have the same feel to it as Uckfield. 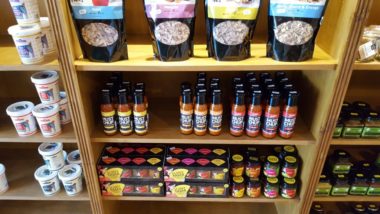 Cheese ETC … has well over 100 cheeses with Martin having a passion for blue cheeses which is probably the reason why over 25% of the cheeses are blue. 30 – 35% are very local from Sussex, with some from Kent and Surrey. There are also a handful of traditional and continental cheeses particularly as there has already been a demand for these. Martin however still has a passion for local unknown exquisite cheeses from Sussex and wants to support the local cheesemakers in the area. Both his and Sharon’s ethos has always been to support local Artisan makers, suppliers and the community and in turn hopefully they will support them in their new venture.

Cheese ETC … has a taster table in the middle of the Deli which has already been incredibly successful. One particular cheese which captured customer’s curiosity was called Charcol briquette made by Carron Lodge which looks like black pudding and has proved to be very popular selling over fifty in the first week of opening.

Both Martin and Sharon will choose a couple of guest cheeses each week for the tasting table and also put out the relevant condiments such as Must Chup, Briscoe’s jelly or West Country Cider to allow customers to try the different taste sensations. Andrew Salter the creator of Salter’s Must Chup is delighted Martin and Sharon chose his sauce range for their Deli however wanted to know why they chose Must Chup. Martin said –

I liked the unique combination of the mustard and fresh tomato ketchup and various chilli and peppers to give you the variety of kicks you have in your range. It certainly goes exceedingly well with the variety of cheeses we have. It compliments more the softer cheeses and also the mixed milk cheeses like the goats, sheep and buffalo cheeses which we have. The higher the potency of Kick like the ‘Big Kick’ compliments our stronger blues with the ‘Original’ and  ‘Kick’ also going very well with our charcuterie taking away some of the saltiness but adding an extra dimension to the taste of our salami and chorizo.

In Cheese ETC … 90% of their products are Artisan supporting local independent small cheese makers’ independent chutney preserve, pesto, spiced sauces, chillis, jellies, salsa’s all of which are predominantly made locally. Support your local supplier! i.e. Rose Farm, La Saucy Salsa etc Cheese ETC… also creates bespoke hampers which can be ordered by phone, visiting their Deli or on their website. The website is due to go live at the beginning of August. Good Luck Martin and Sharon with love from Salter’s Must Chup xx Website:  www.cheeseetc.co.uk      Tel 01825 760435
← BACK NEXT →
We use cookies on our website to give you the most relevant experience by remembering your preferences and repeat visits. By clicking “Accept”, you consent to the use of ALL the cookies.
Cookie settingsACCEPT
Manage Cookie Consent

This website uses cookies to improve your experience while you navigate through the website. Out of these, the cookies that are categorized as necessary are stored on your browser as they are essential for the working of basic functionalities of the website. We also use third-party cookies that help us analyze and understand how you use this website. These cookies will be stored in your browser only with your consent. You also have the option to opt-out of these cookies. But opting out of some of these cookies may affect your browsing experience.
Necessary Always Enabled
Necessary cookies are absolutely essential for the website to function properly. These cookies ensure basic functionalities and security features of the website, anonymously.
Functional
Functional cookies help to perform certain functionalities like sharing the content of the website on social media platforms, collect feedbacks, and other third-party features.
Performance
Performance cookies are used to understand and analyze the key performance indexes of the website which helps in delivering a better user experience for the visitors.
Analytics
Analytical cookies are used to understand how visitors interact with the website. These cookies help provide information on metrics the number of visitors, bounce rate, traffic source, etc.
Advertisement
Advertisement cookies are used to provide visitors with relevant ads and marketing campaigns. These cookies track visitors across websites and collect information to provide customized ads.
Others
Other uncategorized cookies are those that are being analyzed and have not been classified into a category as yet.
SAVE & ACCEPT